My Tweets
Join 5,140 other followers

I once heard that you never knew how many people you disliked until you tried to name your child. In case anyone was wondering, this statement is very true.

It’s not that I have a lot of people that I dislike it’s just that I start to realize how many people and horses that I know. I don’t want to name my horse after someone I know or another horse in the barn; I want something kind of unique!

So, at 5 days old, poor Holly’s second child is still running around without a name. My boyfriend warned me, I better find a name quick because that’s the only thing that will save my handsome little man from going off his rockers. No name sounds right and I fear I will never find one.

I thought that the name would come to me when I took him outside to play for the first time. I seemed to think that he would take a few steps, I would gain full comprehension of his personality and then the name would just appear!

Little man was terrified to go outside, it was like a little kid who gets way into that awesome game called “Lava” where you can’t touch the ground. According to the foal outside the stall was lava, the concrete walk way was lava, the gravel was lava as was the grass and the outdoor arena was most definitely lava! I had to push him in what I called “Wheelbarrow style” where I scooped up his back end and force walked his front end all the way to the outdoor arena. Needless to say it was harder than any sled run I ever did as a Division I basketball player!

Once he got outside he decided to be bashful and hide behind mom. It’s so adorable how his little face is the same color as his moms shedded out summer coat!

Once he figured out how to get his legs to work he was off to the races … As in the worlds slowest race because he didn’t want to get far away from mom and resulted in this adorable short strided little lope. 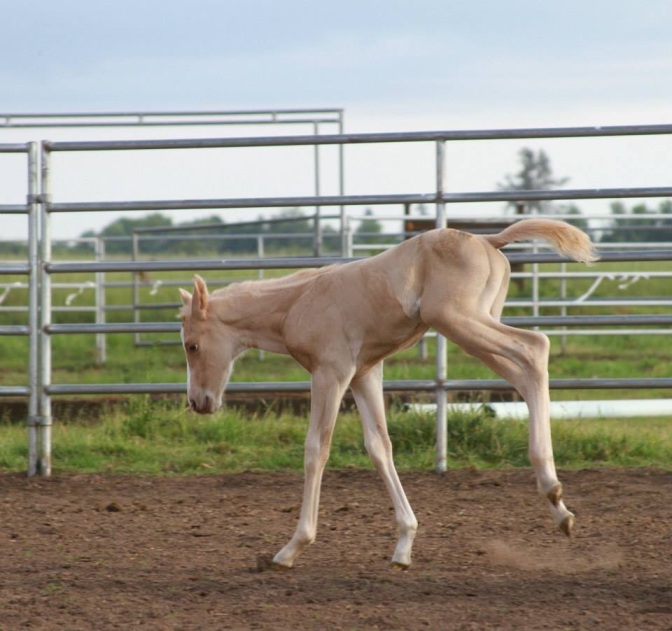 When he was in his stall I had started to thinking he was such a big boy already but I was wrong. Seeing him out in the wide expanse of the world I realized how juvenile he is and how much learning he needs to be where I want him to be someday. He’s a sweetheart though and truly enjoys attention while staying respectful about it.

As for now, he has no name. I’m sure it will come when the perfect one is found but until then, I’m just gonna enjoy my time with the tiny tot.

One thought on “Adventures Outside for the Baby with No Name”