There was an error retrieving images from Instagram. An attempt will be remade in a few minutes.

For those of you who don’t know, Teens and Oregon Mustangs is a program that pairs both teens and adults with mustangs ranging in age from 1 to 3 years old. It gives them 98 days to prepare their horse for a competition in which they will compete for prizes and auction off their horse at the end of the 98th day.

Three months ago, I was sitting on the ground in a stall of a horse I had only just met, crying hysterically and feeling like a complete failure. It was day 5 and she huddled in the corner, quivering and terrified at my presence. I had no idea what to do, I had never been in a situation where I couldn’t even get close to a horse before. We were just two terrified, young animals staring blankly at each other, completely clueless and scared. That night, after my last tear hit the floor, I called my best friend, who was the 2014 In-hand Champion. I asked her what to do and explained how I felt completely lost. She reminded me that she also hadn’t touched her horse, Brandy, for a long time after pick up day. She reminded me how I had to think about these 98 days day by day, where as I had been thinking “how the heck am I ever going to get this horse to do a perfect showmanship pattern or to bow on command?”  After I hung up the phone, I took a deep breath, threw my BIG picture out the door (and slammed it closed behind it!), and headed back down to the barn the next night. 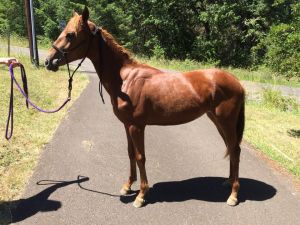 Over the next few days, my dad started to help me slowly gain her trust. In his younger life, my dad worked for a man helping him break colts. Lucky me, I got to learn all the ropes from him as he helped me through this process. As the days passed, he taught me techniques for teaching a horse how to lead, how to gain their trust, when it’s okay to push them and when it’s time to step back. Before I knew it, just 4 days after my meltdown, I was leading, grooming, and picking up her front feet. I began to build onto the little sorrel filly huddled in the corner of the trailer on pickup day; I began to make her something new.

Day by day, I started to see how truly gifted the animal I had been given was. Day by day, I could see her trust for me growing. She no longer shied away when I lifted her halter up, and she now greeted me at front of her stall, instead of huddling in the corner. I’m not going to say the rest of the 98 days was smooth sailing, because well, it wasn’t. We had plenty of moments of pure anger and frustration. Days where, after 2 months of picking up feet, she decided hoof picks were going to eat her alive. Days where she decided she only went clockwise while lunging and told me the other way was a waste of time (although I can say she has impressive rollbacks). Days where, I broke down and cried, put her in her stall, and drove off in rage, tears rushing down my face. But I have to say those days of frustration made her the horse that won the competition; because hey, what doesn’t kill you makes you stronger right? Kelly Clarkson sure got that one right when it comes to frustrating horses.

Every day that I worked with my little filly, there was a certain amount of satisfaction that came out of every frustrating moment with her. If she stepped off a haunch turn, it made it even more satisfying when she stuck the next 360. I learned that especially when dealing with young horses, you have to keep your cool and patience, imagine doing that with anger management! She challenged me almost everyday in a way that no other horse ever had. When I sent my application in for the program, I thought it would be easy. I’ve been riding horses for 13 years! How could it not be easy? I don’t think I have been more wrong about anything in my life. 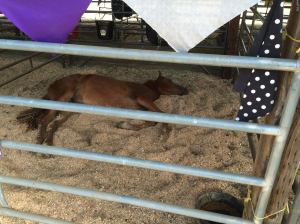 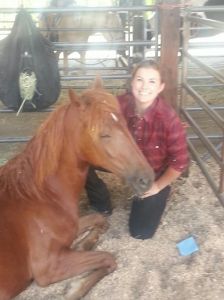 Not only did this filly make me frustrated, but she made me laugh almost every single time I worked with her. One of the huge things that was scary for her was leading on the offside. Tarps? No big deal! Swimming in ponds? Oh we love that. But the minute I switched to the offside, she would start to quiver and stop in her tracks. It took us nearly a month to learn to walk on the offside! It’s those accomplishments that make me smile at the end of the day. 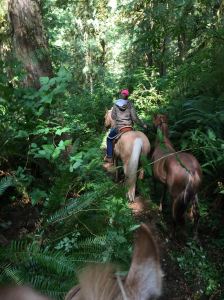 The days that made me feel like I was making good progress, were the crazy hectic days that would have scared the crud out of most horses! Over the summer I competed in the 2016 Miss Teen Rodeo Oregon Pageant. During this competition, my filly was with me every step of the way. I would get to the fairgrounds at 6am and set up her corral and she would sit, barely making a fuss all day. Cowboys rode by swinging ropes and screaming profanities and still she just played it cool. When the fireworks came at night, at first she was scared, but with the comfort of my mare she decided that they were alright. At this pageant, my speech was on the Teens and Oregon Mustang Programs and my filly. In the moment that I stood in front of 40 people, in a leather dress that fit just right, I realized just how passionate I was about the program and about my horse. I realized then, as I said the final words of my speech with tears at the brims of my eyes, how much I love that little sorrel. 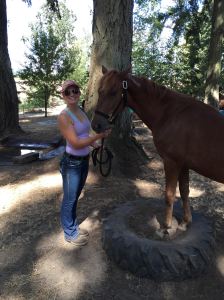 The mustang trainer day was a huge confidence booster for me. When I walked into the trail course that was set up my first thought was “Seriously?!”. But as the day went on, I learned how much she had truly grown to trust me. Teeter totters? No Problem. Freaky spider jump? Easy! Pool noodles and car wash simulation? That’s kind of scary mom, but I guess you walked through it so it’s safe. This became her state of mind on everything. If it was safe for me to do it, she could do it too. Before I knew it there was only two weeks until the big day and I felt completely relaxed and prepared, for the moment.

When competition day finally rolled around, I had my whole support crew with me; the total was two people, my dad and my boyfriend. I felt so stressed knowing that my trainers that had helped me wouldn’t be there or that my mom couldn’t make my competition. I felt like I was back to square one, lost and hopeless! I felt completely unprepared. Even though my horse could do 360 haunch and forehand turns, side pass, set up, bow, and trust me so much she would walk through fire if I said it was safe, I still didn’t feel like it was enough. I was just glad that my best friend was there with me since she was participating in the competition with her horse Stetson.

The day went by incredibly fast, I got all of my classes done by noon and realized I had nothing to do but wait. My showmanship pattern had gone close to perfect, and my trail course was absolutely fantastic. But when it came to my freestyle, I think Shania Twain pumped her up a little too much and we bombed almost everything but the tunnel we ducked our head to get under (which the crowd loved!). We had gotten a call back for body conditioning and the public was loving up on her every chance they got. But even with the incredible day that I had, I was feeling very uneasy when the awards ceremony rolled around.

Both Nelly and I were feeling the nerves when we were standing in line while Erica talked about the process that had gone on that day. I didn’t hear half the words that she said; I was preoccupied trying to keep the pit in my stomach at bay. I spent the majority of the time walking her in circles behind the line, not only to keep her from chewing on my white shirt but also to make sure I didn’t have a panic attack. Up in the stands my dad and boyfriend turned to each other and both knew I was walking around to keep myself calm. I didn’t go to stand back in line until they were at sixth place in the youth in-hand division. My heart was racing with every word and tears were on the rims of my eyes. As soon as they called second place, and it wasn’t my name, a smile the size of Texas spread across my face and I hugged Nelly as tight as could be. I stood back and looked at that moment and I thought “this, this right there is the BIG picture, but I couldn’t have gotten there without all the snapshots in between”. 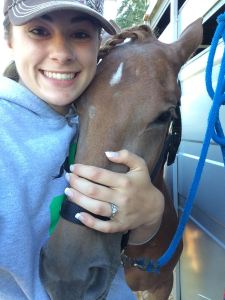 I would like to thank my parents, Steve and Diane Martin for different reasons. My mom for moral support and my dad for hands on work; and both off them for money. I would like to thank my trainers Jenny Freeborn and Lynne Miller who would always answer any questions I had at the drop of a hat and who gave me multiple exercises to use with Nelly. I would like to thank my boyfriend Dakota Dodge for putting up with me during this stressful time of my life and for his dedicated work that he put into my freestyle and helping me with anything and everything I needed. I would like to thank Rachael Macdonald for being by my side through all the ups and downs, for making me smile when I’m sad and for laughing with me about things only equestrians understand; I could not have done this without you. I would like to thank Erica and Josh Fitzgerald for making this whole program possible. And last but not least, I would like to dedicate this to my Grandma Carol, the horse loving, generous woman who I never got to meet.