When I was first told to go check out the Bob Feist Invitational during the Reno Rodeo, I really just did because a guy that I was semi-interested in told me that I should go to it and that he would watch it with me. As an absolute fan of all 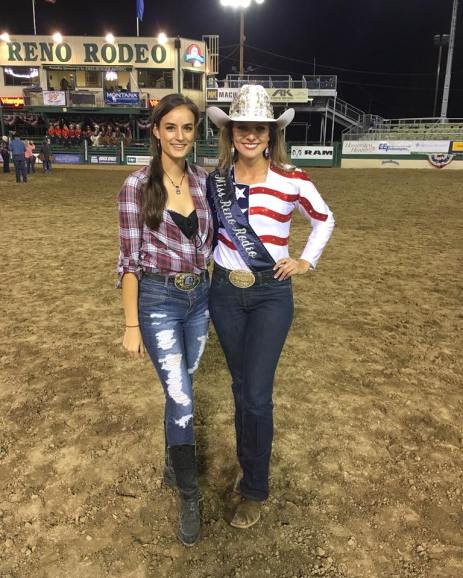 rodeo events but especially timed events, I was all for it! But, just like with any guy I think I find some interest in, I quickly LOSE interest, but my interest in the BFI didn’t go away. In fact, as the months got closer to getting to see my amazing friend be an amazing representative of the Reno Rodeo (2018 Reno Rodeo Queen Jen Fisk), all I could think about was FINALLY getting the chance to not just watch the LiveFeed on my computer but actually watch, in person, THE BFI.

Because it’s me, I like to make an event or a trip as an efficient as possible and every event that I have traveled to this year, I have found something to write about that I can sell so that’s exactly what I did for the BFI.

I almost felt like I had gotten away with a silly prank when I was awarded media pass credentials for the BFI BUT, when you look at it from the marketing perspective, not only did Rachel (my Miss Rodeo California who acted as my second-in-command) and I have THE BEST stats of the event (so much so that everyone wanted to sit by us or take pictures of our notes) but we also got quality interviews, tweeted great content on social media, AND got to do one of our podcasts with Warriors and Rodeo. 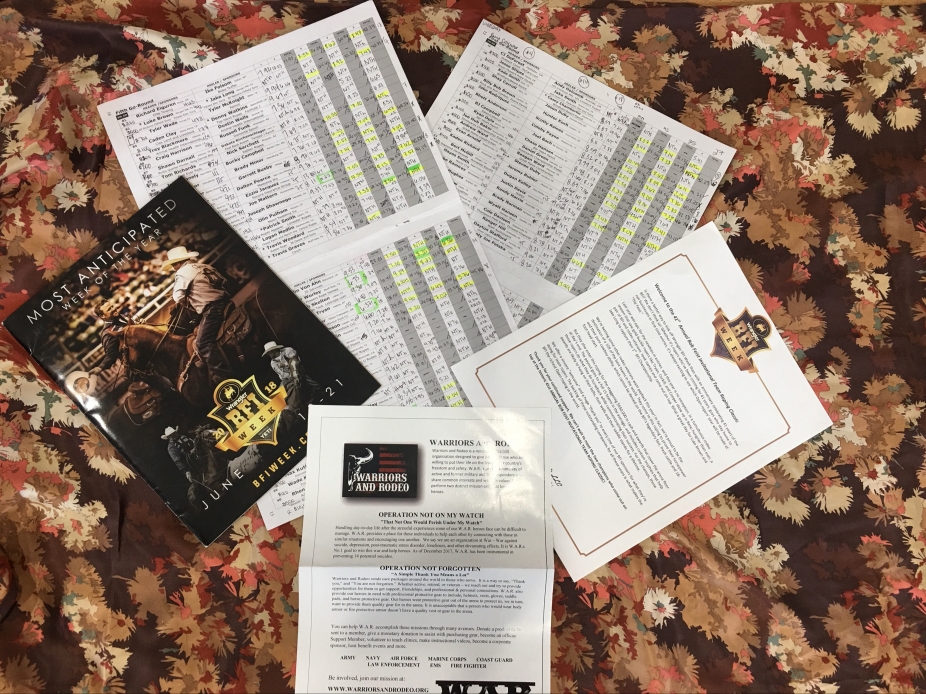 I have literally trained my whole life for the statistical part of the BFI. I had no idea how much I would love it but, as an avid lifetime lover of stats, I was quick to keep detailed records through my own scoring and notation system that allowed me to recount what exactly happened in each round to each team.

Breaking down the BFI…

For those of you who aren’t familiar, the BFI is a HUGE event that is anticipated all year by the roping community. The crazy thing about the BFI is the amount of money and production that goes into it. For the most part they have one of THE BEST social media of any rodeo production group. Second, it’s a whole week long affair and I was kicking myself for only planning on being there for the first day.

Sunday night was the kickoff to the BFI with the dinner and Calcutta. At the Calcutta they auctioned off each of the 108 teams twice. The first time they went through, it was per round. The amount that you bid was multiplied by five for your total amount and no amount was under $100, moving in levels of $100. The second time that they went through was for the average winners.

To start the whole auction off was the Wild Card round bid that went for $1800 (MULTIPLIED BY FIVE) who got their pick of the whole lineup for someone who would win a round. This bidder picked Kaleb Driggers and Junior Nogueira. Seemed like a solid pick, they set the arena record at the Wrangler National Finals Rodeo last year in 3.3 seconds. The Thomas & Mack Center is a hard arena to team rope in, the walls coming fast when the header gets turned for the heeler to shoot their shot. If you can set arena records in that arena, than I would bet some money on them as well to win a round at the BFI… albeit I don’t have THAT kind of money!

To start the average portion of the Calcutta, Chad Masters was purchased for $13,000 to win or place in the average. WHAT?! I had no idea that such big money was rolling with the BFI but, when you’re entering teams for $2,500 a person, I guess it’s going to be some good money!

Here’s why you participate in the Calcutta:

What makes the BFI unique?

If you’re a rodeo fan than you are probably wondering why the BFI is such a big deal. If you want to see the best ropers, you are probably thinking that you could just catch them at one of the contenders for the PRCA large (indoor or outdoor) rodeos of the year instead the Monday morning of Reno Rodeo or the National Finals Rodeo.

An elderly gentleman next to us explain it best. He said, “This is the opportunity for those who are maybe not on the rodeo trail anymore, who are at home training or working, to get out and compete. These are former world champions and World Series Team Roping champions, but then you also see great partnerships form as well to compete.”

A few partnerships or teams that I wanted to point out are Spank & Champ, the Arock crew, and the Johnson’s.

Spencer Mitchell is someone that you all have probably seen on my Instagram, an amazing team roping cowboy who used to rope with Broc Cresta before the rodeo world tragically lost him in an automobile accident. Spencer and his now-wife Whitney were at almost every single Rascal Rodeo (special needs rodeo) that I went to when I was Miss Rodeo Oregon. His kindness and joy for bringing to life those youth that haven’t had it easy at any point in their life just shows how amazing of an individual he is. One of the other facts about Spencer and Whitney that makes me happy? They’re adorable one year old baby boy named Broc. Spencer was roping with “The Champ” or  Clay O’Brien Cooper, one of the most legendary heelers of all time! They roped all five but at 46 seconds roughly they were in the mid-20’s for overall placing.

Richard Eiguren on the head from Arock, Oregon was another team that I was excited about. Partnered with Ike Folsom from Montana, who I wasn’t familiar with, I was really excited to watch an Arock cowboy do his thing. The Eiguren name may be familiar to those who follow along with my life as the family that went above and beyond to stop the Owyhee Canyonlands from being turned into a National Monument by President Obama. These two roped all five founds for a total of 43.39 to just miss the short-go. I was super excited because these aren’t names I often see at the big rodeos but they’re very talented cowboys!

I also loved seeing the team roping combination of Kellan and Jhett Johnson because what’s a cooler story than the 2018 College National Finals Rodeo champion on the head end and HIS FATHER on the heels ON FATHER’S DAY?! Come on, that was a made for Hollywood moment! This father-son duo were dynamite and roped all 5 rounds with a final time of 45.66, meaning they just missed the short-go but placing in the Top 15.

The BFI is a MAGICAL place, I have NEVER seen so many amazing heel shots in one sitting (granted when have I ever watched 108 team roping team rope five founds plus a 15 head shot round. The top 15 shoot out for the short-go was legitimacy so fast that even this basketball statistician had troubles keeping up!

According to the people around us, this was one of the best BFI’s they had ever seen. Talk about a good time to go right? Anyone in the top 15 could have won the shoot out. In fact, anyone in the top 20 stood a good shot of winning it! That’s how close it was!

I CANNOT wait until next year to go to the WHOLE week of the BFI and watch the “Businessman’s Million” or the #11 shootout, the JR shootout and the new All Girls Breakaway shootout. How cool is all of this roping? It really gets your blood pumping to back into the box and nod your head for that kind of money! I love roping but I’m realistic in saying that I am no where near that kind of level!